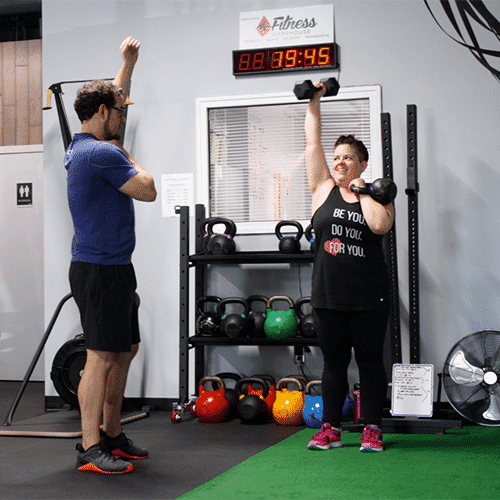 Tiffany Wolf had had enough. Enough with unhappiness.

“I was so tired of being out of shape and unhappy with the way I looked,” said the 35-year-old from Regina, Saskatchewan.

Then someone told her a former colleague of hers, Steve Volke, ran a small garage gym where he trained clients.

“I knew him and trusted him, so decided to give it a go,” she said.

“This is the longest I have stuck with anyone in my life that I’m not related to,” Wolf laughed. “And particularly with someone who sees me at my worst. And it’s certainly the longest I’ve ever stuck with something fitness-related.”

“It’s a support system unlike anything else in my life because it supports every aspect of my life. My friends always ask me why I pay $250 to $300 to go to the gym. Me of all people. I don’t even like to buy new clothes for myself,” she said.

“But I explain to them if I were to break it all down, the amount I would have to pay to get what I’m getting—a personal trainer, access to a facility, someone to support me emotionally, a business coach, someone to hold me accountable to all my goals, and someone to help me with my nutrition—it would be so much more than that. It’s absolutely worth it to me. I will dye my hair out of a box, but I won’t get my fitness out of a box,” she added.

Physically speaking, Wolf said she’s in the best shape of her life today, even better than when she was a cheerleader in High School. She credits this to OPEX’s personalized approach to fitness.

“Steve recognizes that I’m a unique person. He’s not trying to make me super thin or turn me into a bodybuilder: It’s about, ‘This is where you are and this is where you want to go, and if we run into roadblocks along the way, we’ll navigate them together,’” she said.

The approach also removes the stress from going to the gym, she explained.

“I love that I don’t think about the gym when I’m not there. I just walk in, I open the App, I do the workout and I walk out, trusting that I have done something useful.”

Wolf also credits her success to how Volke works closely with other health practitioners in her life.

A while back, she had a toe injury. The injury soon started causing her grief in her hip, her knee and eventually even her shoulder. Together, Volke, Wolf’s physiotherapist and her chiropractor communicated to figure out a way to fix Wolf’s ailments.

“This really helps make sure I am getting the right programming, and also helps fix my deficiencies that are there,” she said.

Ultimately since joining OPEX two years ago, Wolf has become a more capable human being.

“I don’t really care how much I can squat or deadlift or bench press. Those numbers are irrelevant to me. What matters to me is being able to haul my groceries or change the jug of water on the water cooler,” Wolf said.

She added: “I can move with ease now. My son is 11, and if I needed to I could pick him up as dead weight, no problem. That has been another big motivator for me: To be healthy and available for him.”

Though much of their focus has been on her physical health, Wolf said Volke has also been valuable for her mental and emotional health. Last year, this involved helping Wolf make the decision to leave her job and become a freelance communications and public relations consultant.

All of this means, not only is she more capable today, but she’s also much happier.

“He helps me look at my physical health today and in my future, and my mental and emotional health, and how they all tie in together, with consideration to nutrition of course. It’s a holistic approach that works better for me than anything else out there,” she said.