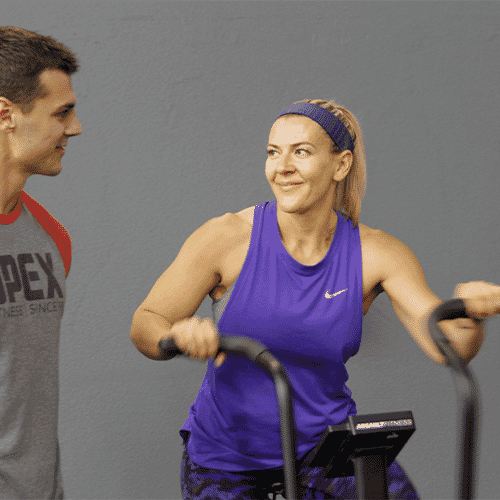 Finally finding her solution at OPEX

After finding a CrossFit gym she loved, the gym soon closed its doors, and she was at a loss. She tried two more gyms, but couldn’t find an adequate replacement.

“I was searching for help everywhere, but I couldn’t find it. I just didn’t feel like I was improving or getting the quality of coaching I needed,” said 33-year-old Chambers from Scottsdale, Arizona. “I didn’t have an athletic background, so I felt like it was really important for me that I was working with good coaches.”

Chambers was hesitant because the idea of following her own individual program sounded a bit daunting, she admitted.

“I had always just imagined it being this really elite place, but I was so frustrated at the time, and she kept telling me just to go in and talk to Mike,” Chambers said.

Feeling like she had nothing to lose, Chambers met with OPEX coach Mike Lee in the summer of 2018 and was immediately sold.

“I just really knew this was my place,” she said.

The moment Chambers started following her individual program, she started to feel better about her fitness, and started progressing rapidly.

“The quality of my movements are just so much better now. I’m figuring out how to hold tension in my body the right way, and just to move properly,” she said. This is something she was never able to figure out going to group classes, she admitted.

“It’s so much better than just going in and doing an intense workout with the group and feeling like I’m going to die at the end like I used to do. Usually in the group we’d do a hard workout, but other things, like mobility, were just up to us to figure out on our own,” Chambers said.

This isn’t the case with OPEX.

“I do a lot of strength work, and a lot of strict movements, which have been great for developing strength. And a lot of core work too,” said Chambers, adding that she has also seen big improvements on her Olympic lifts.

She credits this all to the personalized approach to fitness.

“It’s really awesome because it’s just me against me. I love going in and knowing what my goals are and beating myself,” she said.

Today, Chambers pays $325 a month, two-and-a-half times as much as the $130 a month she used to pay for a group class membership. She’s more than willing to fork out the cash, though, because she’s receiving so much more value now than ever, she explained.

Part of this value is found during her monthly 30-minute lifestyle consults with Lee.

“They’re awesome. He checks in to make sure everything is going well, and I get a lot of reassurance that I’m on the right path. Sometimes I go in with a list of questions, and sometimes we just chat, but it’s great having a coach that cares about how my life is going outside of the gym,” she said.

One area Lee has been particularly useful has been with nutrition.

Chambers had been dealing with a lot of inflammation in her body, as well as some thyroid problems. In light of this, Lee suggested she avoid FODMAP foods, which are poorly absorbed by the body and often cause bloating and abdominal pain, as well as nightshade vegetables. Avoiding these foods has made a world of difference to the ways she feels, Chambers said.

Lee also introduced Chambers to the concept of seed cycling, which uses various seeds to support different phases of a woman’s monthly cycle in order to balance hormone levels and relieve symptoms of PMS, among other things.

These types of concepts were never addressed in her experiences at other gyms, Chambers said, and are making a huge difference to her life. And they’re what will continue to allow her to reach her long-term goals, she said.

“I have two girls—7 and 4—and I just want to be able to keep up with them forever, and continue to build strength and move correctly. And throw a football with my husband,” Chambers said.

Ultimately, she credits Lee with putting her in a place to be able to do all of the above.

“Mike (Lee’s) just so educated. When I go and talk with him, I feel like I’m going to see a doctor,” she said. “I just totally trust him. I trust the process, the programming, everything.”

“They have really good communication with each other. I’m not getting inconsistent coaching anymore, which helps a lot,” Chambers added.

Her next goal: To get her husband to switch over from group classes to OPEX.

“My husband will come home and roll out and he’s always so sore. I swear he has a stiff neck every other day. And I think, ‘I feel so good, yet I’m doing so much more work than you,’” Chambers said with a laugh.

She added: “I don’t know, I’m just so proud to represent OPEX. I wear the t-shirt all the time. It’s the training that I need.”