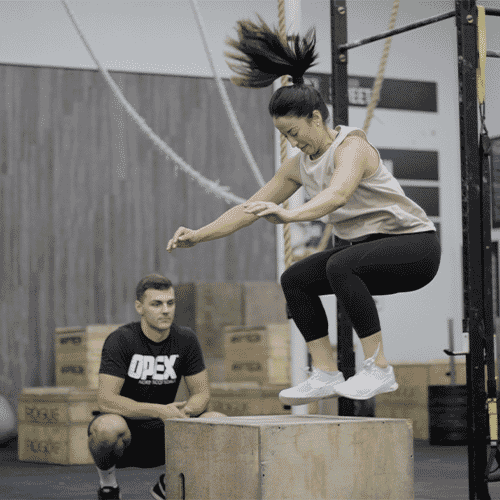 OPEX Gyms Client: Janice Hardwick | Benefiting from her own program.

Benefiting from her own program.

How Janice Hardwick used OPEX to transform a postpartum
hot mess into a 180 lb. back squat

A prolapsed bladder and rectum were just two of the issues Janice Hardwick had to
deal with after giving birth to her second child in 2016.

“I basically lost all muscular ability in my pelvic region. When I would sit up to get out of
bed, I would feel a bulge coming out of my vagina and I leaked urine all the time,” said
Hardwick, adding that she also had no control over her bowel movements.

Needless to say, she was a long way away from the fitness level she used to know.
Before her pregnancy, Hardwick could squat 205 lb., but she now found herself
experiencing sharp pains in her left groin if she even tried to bear weight, let alone squat
with it. She knew going back to her former life of fitness in a generic group class
environment wasn’t going to help her heal, she explained.

At the same time, her husband Carl Hardwick, an OPEX Coach Certificate Program
(CCP) coach, suggested she try some individual programming to improve her physical
situation. (Both the Hardwick’s work for OPEX: Carl is the COO and Janice is now a
coach advocate).

Before Hardwick began her training program, her husband bounced ideas off James
Fitzgerald to figure out the best course of action for his wife.

“Originally, I looked for a pelvic floor physiotherapist but couldn’t find one. And then Carl
and James worked together to come up with exercises to help my pelvic situation and
build an exclusive plan just for me,” said the 31-year-old Hardwick.

“And it has been absolutely phenomenal. …I can bear weight again and I don’t have a
bulge coming out of my crotch anymore,” she said.

Not only has Hardwick’s program helped her fully rehab her pelvic weaknesses, she has
also gained much of her former strength back. While she hasn’t tested a 1RM back
squat recently, she has logged reps at 180 lb. and said she feels she is back to her old
strength level.

Hardwick doesn’t think her rehab would have been nearly as smooth without an
individual program designed specifically for her personal needs and limitations.

“I don’t even think working with a personal trainer would have been as good. And if I
was going to group classes at a CrossFit gym, sure I would have seen the benefits of
doing cardio and getting that endorphin rush, and the social benefits of being with a
group, but I wouldn’t have been addressing the issues that I needed to and I probably
would have done more damage than good,” she said.

“Yeah, I could modify things in the group so I didn’t hurt myself, but it would only be a
matter of time until I’d just want to do the things that everything else was doing,” she
admitted.

Though Hardwick came to OPEX with some serious physical limitations, she said she
believes the individual program design model is best for everyone, regardless of your
strengths and weaknesses.

“The main thing is you’re literally getting assessed to create a recipe made specifically
for you and your goals. It’s not a cookie cutter workout plan. And I don’t think I’ve seen
anything else like this. I mean, high-level athletes follow programs specific to whatever
sport they’re doing, but the general population doesn’t so much,” she said.

Hardwick added: “This really is what provides the best long-term health results, and not
just in the gym, but also your lifestyle, sleep, nutrition. It helps you tackle little things one
by one and implement new habits for a more fulfilling life. So it’s really not just about the
workout. It’s about the rest of your life.”