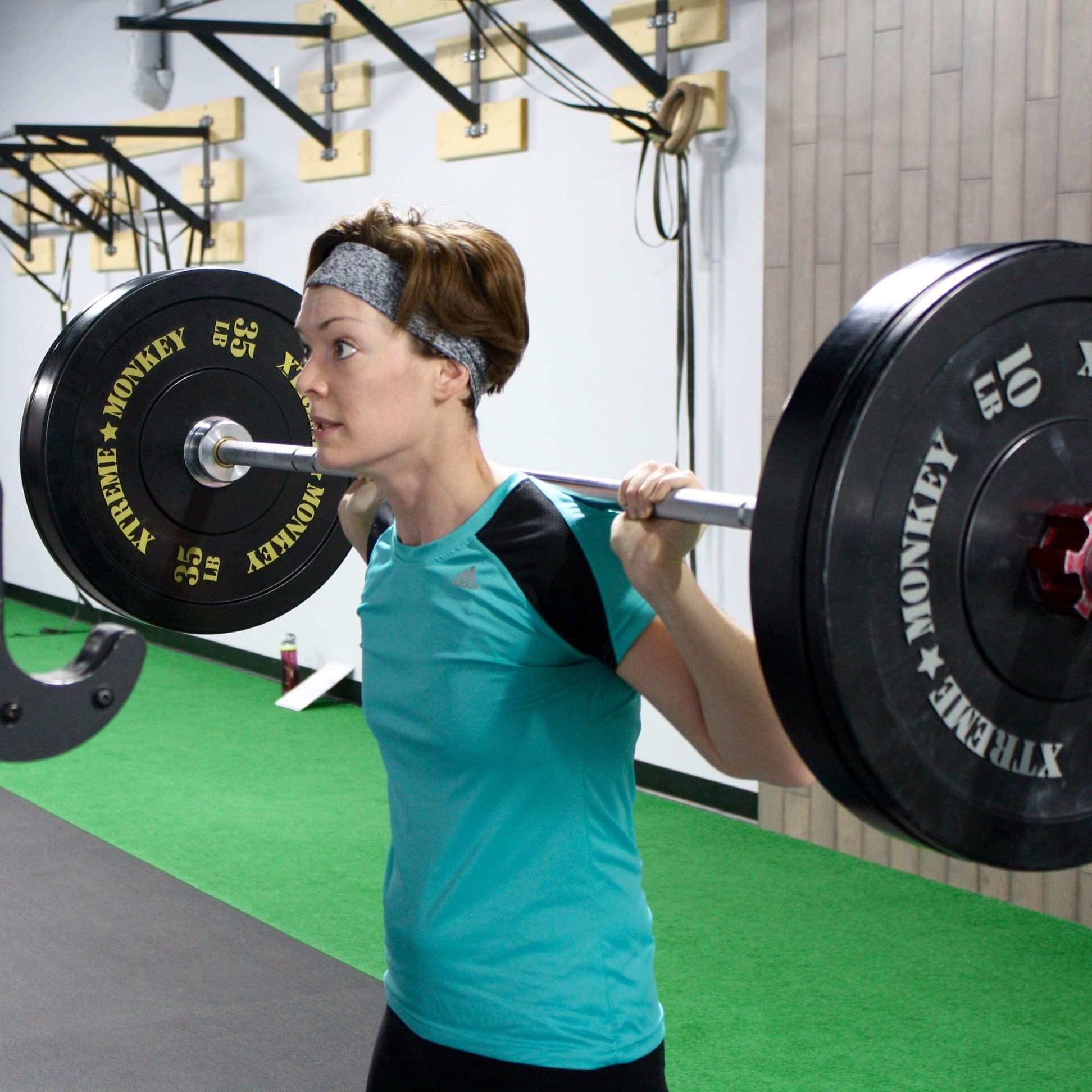 Heather Anderson: From Postpartum Recovery to a 220 lb. Squat

Heather Anderson had never really been totally into fitness. She tried various things over the years, but nothing ever stuck.

But after giving birth to her first child, she was ready to turn a leaf and make fitness a priority.

“And I knew I didn’t want to do something like a boot camp, where I can’t walk for four days after. That’s just not really an option when you have a little baby,” said the 34-year-old Anderson.

Then a friend of hers told her about Steve Volke, who at the time trained and programmed for clients out of his garage gym.

That was six years ago. Today, Anderson is still working with Volke, and now trains at the gym he owns, OPEX Regina in Saskatchewan.

What spoke to Anderson from Day 1 was the individualized approach to fitness, she explained.

“I was postpartum and basically just looking to recover from childbirth when I started with Steve. He really got that, and got that my main goal was just to get back to being active,” she said.

In the last six years, Volke has helped Anderson do much more than that.

“My endurance is way better and my strength too. I remember in the early days being happy I could squat with 55 lb., and now I can squat 220 lb. It has been a gradual build-up, but it has felt natural. I don’t feel like I’m risking hurting myself. Steve knows how to program to my strengths and knows exactly what I’m capable of,” Anderson said.

She added: “He knows my abilities even better than I know them myself. Sometimes he’ll tell me he thinks I am capable of something and I think it’s outrageous but then he’s always right. I can do it.”

These gains at the gym have helped her entire life, she said.

“It really does translate into my mental and emotional health—just that confidence to take on new challenges—and it has even translated into my work life,” Anderson said.

Beyond the strength gains, Anderson said she sees Volke as a life coach, who also helps her navigate stresses in her life.

A couple years ago, Anderson was experiencing some big stress at work with a big project she was working on, and her husband was also going through a career change so there were some financial stresses, as well. In the past, these types of stresses would have been reason for Anderson to fall off the fitness wagon, but instead, Volke just made her programming more manageable during this time.

“He was able to accommodate my training to what I was going through, so I was able to maintain fitness. He knew what I’d be able to handle mentally,” she explained.

The monthly consults she does with Volke have played a big role in him getting to know her and her unique needs, she explained. And this personalization is the reason Anderson’s still around six years later.

“It’s so personalized and so adapted to you that you will see success, whereas in a lot of other gyms or fitness fads, it’s not catered to an individual person so people stop because they fail,” she said. “The individual program is easier to maintain. At this point, it has become a habit. I don’t see the gym as, ‘Oh, I have to go to the gym now’ anymore. It has become part of my lifestyle.”

All this means, the CA$250 a month Anderson forks out each month for her fitness seems like a small price to pay.

“The value of what I’m getting is so high. It’s not just access to the gym and programming. It’s the flexibility and how Steve accommodates other pressures in my life, and the people I have met are so supportive. So the thought of giving up this environment is not something I’d consider,” she said.