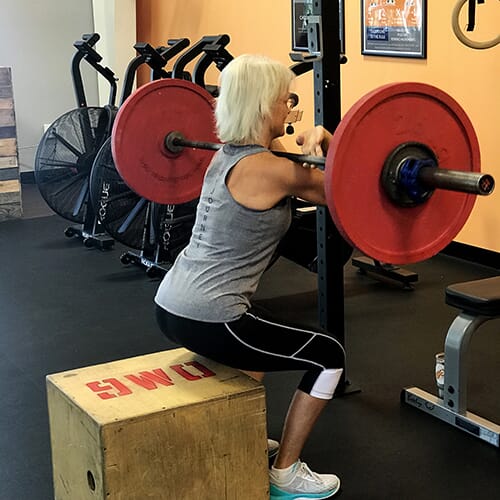 From Group Class to Coach For Life

From Group Class to Coach For Life

56-year-old Cindy Keisler was always into fitness, but she didn’t always get the best results she could.

“I mean I have always worked out, but I did it pretty much by myself for a long time and found myself floundering, just guessing what I should be doing,” she said. “Then I started doing CrossFit in 2014 and I loved the workouts, but I kept getting injured.”

Keisler has had a knee replacement and has dealt with injuries in her shoulders, and she found herself struggling in the group setting, she explained.

“I would join in with the group but I had to scale everything and I was always like, ‘I can’t do this, I can’t do that.’ It was frustrating,” she said. “The programming in the group just didn’t work for me.”

Then one of the coaches at her gym, Carl Hardwick, started offering programming for people who didn’t want to do the group classes.

“So I asked him if he could write my workouts, and that’s how I got started with him,” said Keisler, who now goes to OPEX Midlands (www.opexmidlands.com) in Lexington, South Carolina.

Being on an individual program design has made all the difference to her fitness and her life, Keisler said.

“I could tell the difference right away. There was no more, ‘Ow, this hurts and that hurts. I have to skip this and that.’ I didn’t have to skip things anymore because he knows me and what I need.  He sees what I can do and what I can’t do, and we have consults where I tell him about my goals, and he programs to help me get there,” she said.

Physically, she started to see progress she never saw during group classes.

“I had never done a pull-up before, and all of a sudden I could do two in a row,” she said.

About his pupil’s immediate gains switching to individual program design, Hardwick said: “She reached her goal of getting her first pull-up at 56 years old (and) improving her health and vitality tangibly through blood work and (being) connected to the community at OPEX Midlands. She now hates rest days because she doesn't like to go a day without seeing the people in the gym.”

She is a joy to work with, Hardwick added, saying, “She has missed zero—yes zero workouts or consultations in five years. She has a deep appreciation (for) and values having a coach.”

Beyond the physical gains, Keisler said the OPEX system has helped her develop a closer relationship with her coach, something that has been tremendously helpful for many aspects of her life, she said.

“I’m not a social person, but it forced me to open up and talk about my weaknesses and stuff that’s hard for me. With my family and close friends I open up, but not with other people, so it has been really good,” she said. “He kind of pushes me in lots of ways. He pushes me to do things I wouldn’t normally do because I didn’t think I could do it.”

Through their consults, Hardwick has also helped Keisler with her nutrition, she explained.

“I was a typical female and thought I needed to lose weight or drop body fat, but he got me out of that way of thinking and now he gives me macros to fit the workouts I’m doing to help me try to build strength,” she said.

Keisler said without Hardwick, she wouldn’t be nearly as fit and healthy as she is at 56.

“If I were still doing CrossFit group classes,” Keisler began with a laugh, “I wouldn’t be where I am. I probably would have gotten so frustrated that I would have quit.”

She added: “I’m way healthier than I would be. I just feel good. Whenever I go to the doctor, it’s almost a game to me. They always rave about how my blood pressure is so low, and I know if I hadn’t been doing OPEX this probably wouldn’t be the case. …And when I donate blood, they always comment on my (perfect) blood pressure. They’re just floored by it, and it’s because of OPEX.”

Keisler insists she’s not special. She’s just a normal 56-year-old woman who is lucky to have found a coach and a program that works. And she recommends others her age to do the same, she said.

“I’m not special. I’m just a plain Jane. But I keep coming back for more. I absolutely love working out, I love the programming, I love having a coach, and I never want to quit as long as I can hold up.”